Consistency in Funding: Toward a New Funding Model

These past few weeks of soliciting donations for TM/C's Mapping Solutions event have been an education of sorts. At times, it's seemed that my attempts to spread the word, in person and through mail, add up to nothing more than exercises in preparation for future failures. These weeks have illustrated why perseverance is a necessary trait for anyone who wants to get into the nonprofit business.

But along with perserverance, this experience has also taught me a fundamental…

“There must always be room for judgment, but judgment aided—and even enhanced—by procedure.” Dr. Atul Gawande, The Checklist Manifesto: How to Get Things Right…

Like other intellectuals whose legacies have been marginalized, even mired, when the conditions of the world proved not very amenable, or outright hostile, to their theories, Sen. Daniel Patrick Moynihan spent some time in the valley of… Continue

In the suburbs, where I live, there is an entire shadow population of impoverished citizens that is rarely mentioned in studies on poverty—an issue that most people seem to associate with the inner-city. But poverty is no respecter of jurisdiction. Dan’s recent blog…

The issue of education reform has gained considerable traction in the media, thanks in no small part to the documentary that Dan mentioned about a week ago called “Waiting for Superman”. I haven’t seen it yet, but apparently the scene on which the film’s raw emotional power hinges takes place…

A Personal Introduction to Social Networks 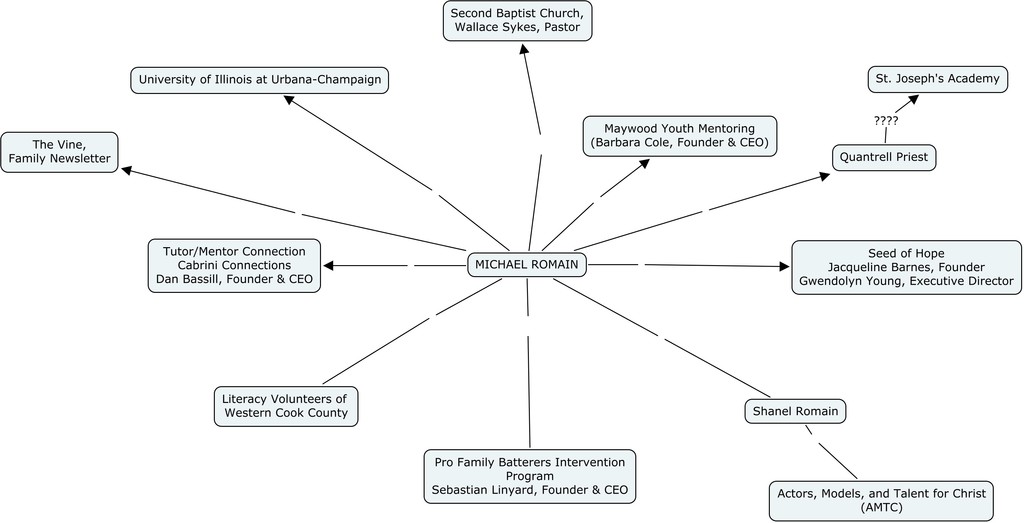 Consistent with TM/C's emphasis on social networking, I created my own network of affiliations using CMAP. This is rough in comparison with others who've posted theirs, but it's a start. From here, I'll start making connections among the various affiliations, digging even deeper into the ways in which they relate and exposing even more nodes of…

Change We've Been Waiting For

In his September 8 blog post , Dan put Mayor Daley's historic decision not to run for reelection in the context of tutor/mentor interests throughout the city. During his over 20-year tenure, Daley enacted educational reforms such as the adopt-a-school initiative that, while laudable, weren't far-sighted enough. Daley's myopic focus on school performance worked to the detriment of a more holistic, community focus.…

The Future of Wealth

In Harvard Business Review’s September issue, there’s an article—“A New Alliance for Global Change”—that predicts nothing short of a paradigm shift toward a new business-nonprofit partnership: “Collaboration between corporations and CSOs [citizen sector organizations] has reached a tipping point: It is…

My experience so far with Dan and T/M C brought me back to a passage of a book I read earlier this year, Thomas Friedman's The World Is Flat: A Brief History of the Twenty-first Century. Friedman wrote:

"The key breakthrough that enabled Google to become first among search engines was its ability to combine its PageRank technology with an analysis of page content, which determines which pages are most relevant to the specific search being conducted. Even though Google…