“There must always be room for judgment, but judgment aided—and even enhanced—by procedure.” Dr. Atul Gawande, The Checklist Manifesto: How to Get Things Right

Any individual or organization planning a mentoring program should first read the report commissioned by The Mentoring Center in 2000, which found “two distinct areas of challenge within the general field of mentoring and the mentoring agencies that make up the field.” The first, which essentially leads into the latter and is the most striking, was the need for a general acknowledgment, among people within the mentoring community and outside of it, of the practice of mentoring as an “emerging discipline,” one with a codified body of procedures of a kind typical to any profession. The second area of challenge was the “current condition, pressures and capacities of the mentoring agencies” in the field.

The report calls for both volunteers and professionals involved in mentoring to take a critical, managerial look at mentoring as more than a hobby or a “good cause.” “Our research has revealed that the field of mentoring is generally lacking [a] systematic approach, a ‘science’ if you will…”

It would be a mistake to think that because mentoring starts with one human being positively intervening in the life of another that is where it ends. Individual judgment is only the start. What must accompany any attempt to organize a mentoring organization or group or one-on-one relationship is a disciplined, critical approach toward establishing effective procedure. The “how” is just as important as the “why”—purpose shouldn't submerge method; it should burnish it.

This means focusing on the same concepts that businesses focus on during the planning process—delivery systems, supply chains, infomatics, efficiency. One of the few differences is that a mentor’s “bottom line” isn’t monetary profit. It’s the common good. During the next several weeks, I’ll evaluate several important aspects of effective programming—with much of my research culled from Tutor/Mentor’s virtual library. 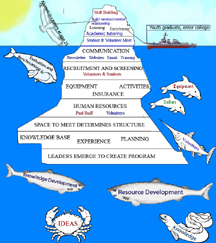 I created this graphic a couple of years ago and included it in this blog article to illustrate the work and planning that supports an on-going students and tutor/mentor relationship.
Finding and sustaining a flow of operating resources and talent needed to provide this support is one of the biggest challenges we face at Cabrini Connections and the Tutor/Mentor Connection. As your readers understand what it takes to make effective mentoring possible, I hope many will see themselves as a catalyst who can help provide needed resources.