EveryBody, Thank you So far.

I and Peter have done our projects after all. I feel so grateful to you guys. We didn't give you anything

But you gave us so many things. I don't know how to thank you enough.

Even though we come back to Korea, I would miss you guys and the time when we have had before.

it's short time to be with you, but It was good experience to learn a…

I finished the T/MC Goal Presentation which can be played on Adobe Flash player. I attached the file. I've learned about Adobe Flash, since last month. So, I have a lack of skills. But, I hope that this presentation will be helpful to the Cabrini. Goal.swf 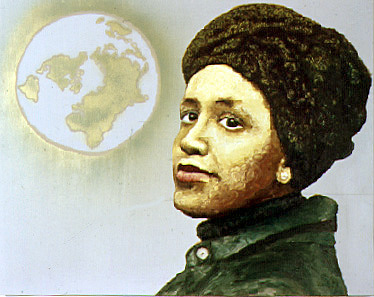 Hi.. this is revised version of my project

the reason why it took so long time to make project is that sound problem.

But I have solved this problem and it's working properly.

If you find some problem on my project, Please let me know.

The Second Vatican Council (1962-65) called for the renewal of Lent, recovering its ancient baptismal character. This recovery was significantly advanced by the restoration of the catechumenate mandated by the Rite of Christian Initiation of Adults (1972). As Catholics have increasingly interacted with catechumens in the final stage of their preparation for Baptism, they have begun to understand Lent as a season of baptismal preparation and baptismal renewal.…

Four-weeks ago I started my internship at Cabrini Connections, Tutor/Mentor Connections. Cabrini Connections is a non-profit organization designed to enrich and further develop the lives of students who live in low-income neighborhoods such as Cabrini Green. They do this by providing tutor/mentor programs for these students after hours, which not only provides alternate learning opportunities but keeps these students out of trouble. At my internship my job is to promote the organization further… Continue

Hello.
I am making the presentation which related with T/MC goal. It is just completed 30%. So, It's not worked yet.
Goal.swf

Hi. this is project which is inserted sound effect.

Hi.. I would attach the file on the comment.

It took one week that I have inserted the sound effect. it's too complicate to explain it.

That is, there are two parts that are my project and Peter project. But when I have inserted two parts, it's messed up. I didn't find it out after all. as you see the file, you can check just Peter part Sound.

Which means I can insert the sound of my part without Peter part sound.

If you have good…

This video was created last week. The announcer is E Wilson, an intern from Loyola University Chicago, who writes a blog on this site. The video was created by Bradley Troast, who is our Northwestern University Public Interest Program Fellow for 2009-10. He's also a member of this group.

The video features volunteers from Cabrini Connections who are tutors/mentors and are helping raise money needed.

This is another demonstration of how… Continue 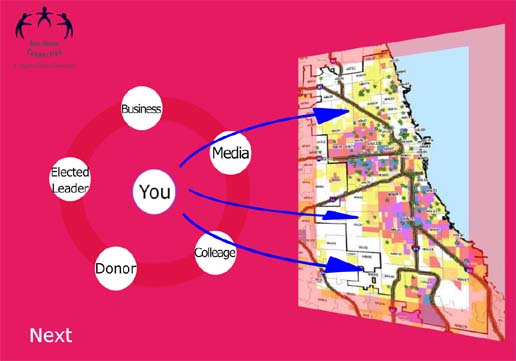 This is a graphic created by Jawon Koo, an intern from IIT who has been with Cabrini Connections Tutor/Mentor Connection for about 3 weeks. It's part of an animation, converting a T/MC article into…

This is descripts for project.

I and Peter wrote this descripts. So It need to be revised from you.

Thank you. I will add the file on the comment. because this situation cannot make me upload the file.

Starting today Cabrini Connections, Tutor/Mentor Connection is proposing the first of many fundraisers for Cabrini Madness to come.

This fundraiser in particular will be a challenge to see which team of kids, volunteers, staff members, board members, and friends and family of Cabrini Connection can raise the most money. To celebrate our efforts and the money we fundraised for the Cabrini Connections, Tutor/Mentor cause we will host a bar night.

So, round up all…

we have made the project finally, but without sound.

Enjoy it and I hope to hear your opinion about this file.

Thank you and See you

For 16 years Cabrini Connections has been hosting the Tutor/Mentor Leadership and Networking Conference all over Chicago. This year I am proud to say that our 31st conference will be held at Loyola Universitys Lakeshore campus. This biannual conference is part of an ongoing effort to improve the quality and availability of tutor/mentor programs in areas of Chicago with high concentrations of poverty. Through the Internet, this conference connects program leaders and supporters in Chicago…

Update as of Thursday, February 4 2010 on the Maranatha School and Orphanage in Haiti

New York Group Arrives with More Food and Tents: Richard Laurent, Haitian-American supporter from NY, and a few other fellows just arrived at Maranatha via the DR for their 2nd humanitarian trip. They brought 60+ tents, donated by individuals in NY, as well as by Tent City. Thanks to the New Yorker’s for providing our Haitian neighbors with a home! Richie also filled the bus with more than 1,000 lbs. of food. Crossing from the DR was difficult this time, as the border patrol are now…

This is my second project(Revised version). refer this article.

Hi. I made the first page that will make someone understand this company.

If you have some questions or suggestions, let me know.