Success in today’s economic climate is largely dependent, among other things, on the strength of social networks. A strong social network increases efficiency and competitive advantage of an organization by enabling information exchange within the organization. Social network analysis (SNA) tools are used by organizations to analyze large amount of data stored in their databases and map relationship among them based on shared features. These tools also provide a better understanding of the organizational structure, like who reports to whom, or interaction among different project teams etc.
Here’s an example of how such a tool can be used to map the evolution of the social network within the SNA group of Tutor/Mentor connections (T/MC). It also shows how different people are taking the lead in the SNA group to keep the project moving in order to achieve the goals of T/MC. Inflow social network analysis software training was held at T/MC on 25th February 2010. The first map (Figure 1) shows the interaction among the members of the SNA group before the training in February. In this map, we can see that Dan Bassill is directly connected to most of the members of the group. So, he is the central hub of the network.
I have used a scale of 0-4 to show the strength of relationship between the members in
the SNA group. The definition of the scale is as follows: 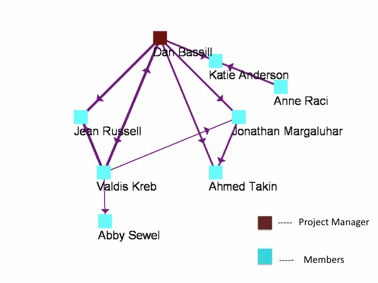 After the SNA training, everybody got connected to each other with Dan being the central hub (Figure 2). The strength of relationship between the members of the SNA group has also increased after the SNA software training 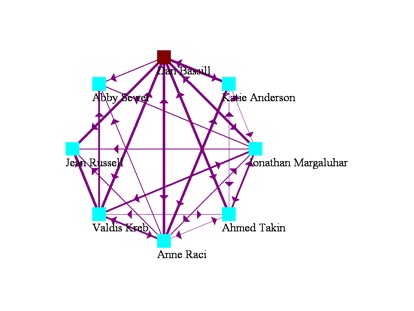 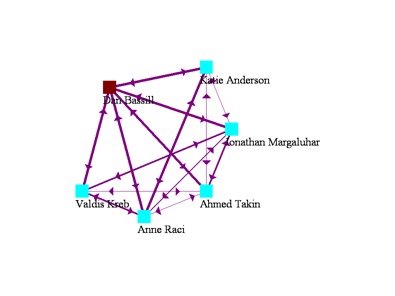 
Jonathan and Ahmed left the SNA group few weeks after the training and two new members Karina and Kalyani joined the group. The following map (Figure 4) shows the interaction among the members of the SNA group after introduction of two new members with Katie and Anne currently being the project leads. 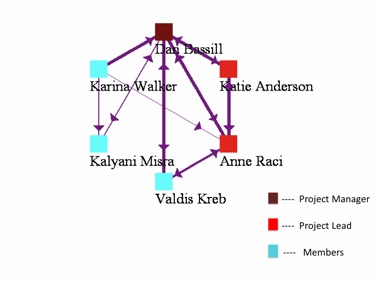 This is the current network map ( Figure 5) of the SNA group after the inflow software training of the new members. Here everybody is connected to each other with Anne and Kalyani being the project leads. 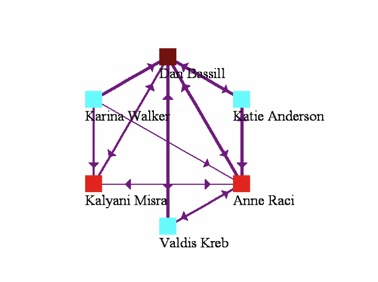 Comment by Daniel Bassill on August 23, 2010 at 2:16pm
Thank you Kalyani. This is a good demonstration of how we can show the growth of a small group of people who have responded to the invitation of one, or more people. In this case, the invitation came from myself, as founder of the Tutor/Mentor Connection.

The T/MC was created in 1993, and so there have been many people coming together to help us in the 17 years since then. This list is just one that shows different people and organizations who have help in one or more ways.

As you, Anne, Katie and others learn to use InFlow and write SNA reports like this, my hope is that we attract the attention of the larger community of SNA experts, who will add their own thinking to this project. I also hope we attract the attention of donors who want to end poverty, and who realize that without someone like the T/MC sending an invitation and connecting people to each other, not much can happen to change the future of youth born or living in poor neighborhoods. If those donors provide funds we can expand the work we're doing with SNA, and the T/MC, and share this in ways that it is duplicated in other communities around the world...who then become an expanded part of the T/MC network, as we become part of their own networks.

I'll look forward to seeing more of this type of analysis from you, Anne, Katie and others.