Yesterday I watched a talk on TED which I think is worth sharing to all of you guys who try to work someway to function Cabrini Connections, Tutor/Mentor Connection more effectively, or who participate in this program but have a question mark in their heads thinking if this's worthwhile, or even those who are still hesitating in front of CC T/MC's gateway.
Following are what I find it meaningful in the talk:
1. To draw more people's attention into CC T/MC's program and keep them stay in touch, our current members should build emotional connections with them. It agrees for no doubt that the person who someone cares the most is obviously himself or herself. So in our process, we should help people who take part in our program figure out why they, as individuals, are so important to us, and what kind of relationship can we provide with them to make them feel beneficial and happy. Once emotional connected, we breed their loyalty to this program. They'll be our longterm members since they know we are the people they can always count on.
2. As people who do NOT dare the ordinary, other than pursuit and manage what we can measure, shouldn't we focus on what's intangible, say self-actualization? Following is the pyramid showed by the speaker in his speech, illustrating people's needs in life. At the bottom is the basic tangible things to make us survive. As our needs go all the way to the top, we begin to want to achieve intangible transformation. 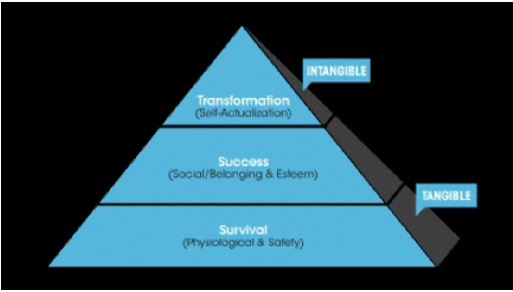 True, different people have different ideas about what their own self-actualizations are. Due to the social environment, majority view it as making great fortune or gaining popularity. As the speaker mentions in his talk, most people have been fooled by GDP so that we still wallow in "19th- and 20th-century industrial-era model of success". Now we've spent almost a decade in the 21st-century. Are we still going to stay in an era lowing our standards, viewing the basic needs as our ultimate goals? Maybe it's time for us to think about what is an alternative definition of success, besides money.
This talk provides a plausible answer. We should pursue real happiness.
Found in 1993, Cabrini Connections, Tutor/Mentor Connection prospect its actualization as helping kids from under-privileged families to get as much opportunities of study and work as other children. As a small non-profit organization, holding a big vision like this for 17 years is not easy. But why is this program still alive through all these years? It is the intangible fulfill that brace it. CC T/MC not only gives chances to those youth to compete with others at the same level, but also gives chances to the society not to miss real talents. It creates conditions for others' happiness to occur. It is a habitat of happiness.
3. Then, what is real happiness? Rabbi Hyman Schachtel said, happiness is not about having what you want. Instead, it's about wanting what you have. Many people nowadays spend most of their life time seeking quick success and instant benefits, even though they know they are not able to anticipate it all, or what's worse they themselves don't even really want what they pursuit! On the other hand, there a great number of people who lack of basic opportunities of living, study and work. These people in need are not faraway on the other side of the world, they are just in your neighborhood! In that case, why can't people share? Each takes what he needs so that everyone can have its own real happiness.
I know after reading this, some people may still argue that things won't work as what I said in reality. Because "reality" is something that is usually brutal, ugly and not satisfying. However, I'd say we should always cherish a heart of newborn baby, not with that can we succeed.

Comment by Daniel Bassill on July 2, 2010 at 9:45am
Over the past 35 years of leading a volunteer-based tutor/mentor program I've learned that the volunteers gain as much from their involvement as the young people do, and that the benefits grow geometrically the more time and talent a volunteer contributes to this work.

Below is a graphic from a volunteer-involvement animation, created by another one of our interns last spring.

The goal of this volunteer-involvement is to build the emotional connections, the believe in the vision, the intangibles, and the ownership in the vision, that will result in more volunteers becoming willing to devote a lifetime of time, talent and dollars to helping people from disadvantaged areas overcome the challenges they face to experience more of the joys of this world. 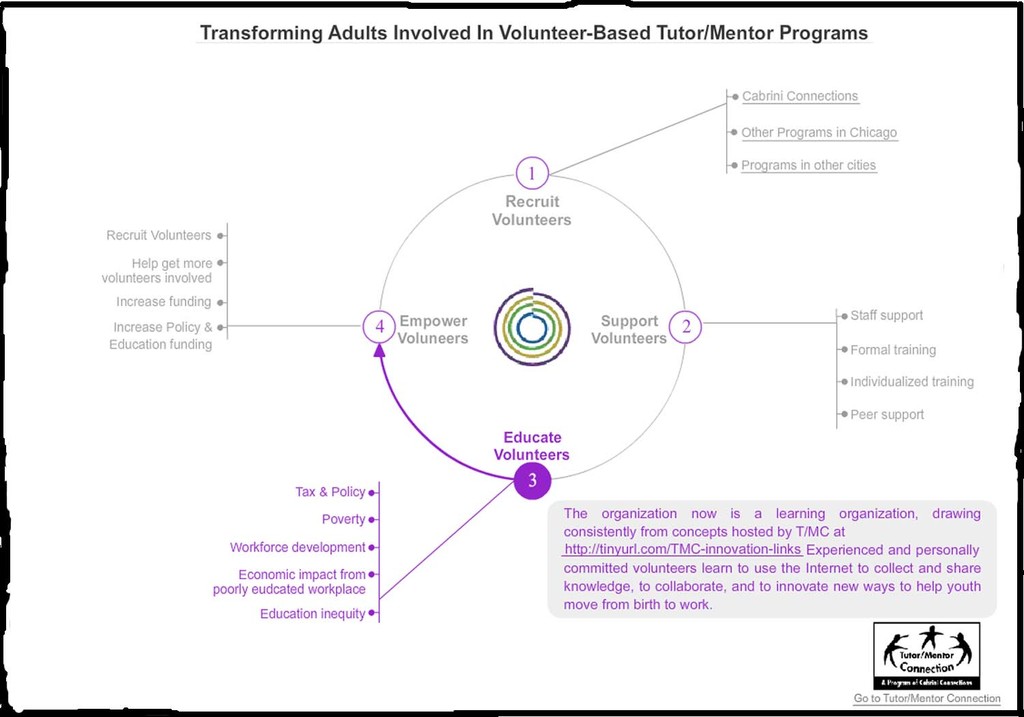 Adapting to Change, Loss, and Possibilities: Learning With Champions of Learning