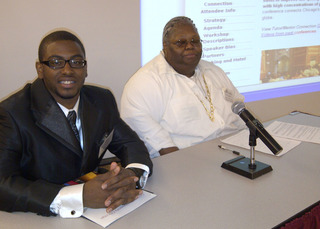 Good morning How is everybody doing? Glad you could make it
----------------------------------------------------------
Well I guess I’ll just dive in
As you have read or maybe just heard, I am Maxine Williams, the coordinator of the FunDay School tutoring program.
But what you do not know is why I am standing up here speaking instead of one of the other many capable and accomplished people in this room.
Let me try to connect some dots for you...
unfortunately...starting with a grim newspaper clipping from the Chicago Tribune
“Three days after the shooting, at a wake in the school gym on Friday, members of Congress, state senators, and the Mayor were among the people who stood in line in the cold outside, then filed past the coffin, which was strewn with flowers.
The Rev. Jesse Jackson spoke at the funeral. He called for gun control and it brought cheers from the mourners. "And his demands that parents take responsibility for their children brought foot-stomping agreement and deafening applause,"
_______________________________________________
In the conference announcement that Dan sent out last month, he made reference to a CBS 48 Hours program that discussed crime, violence, gangs and drugs in Chicago and how they were destroying our youth...figuratively and literally killing them.
Even though he suggested that we watch a video of the program, Dan also declared that we’ve heard this before and challenged us to think about what can be done to combat this destructive behavior that has taken place for decades.
I could sense Dan’s frustration and understood it well....because...
That CBS program featured Hidiya Pendleton, a promising 15 year old girl who was gunned down on the south side a few months ago...but...the newspaper clipping that I read was from 1984, when the nation’s top high school basketball player at the time, 17 year old Ben Wilson, was gunned down on the south side
Yeah, that means, this stuff has been going on much too long and somebody has got to do something about it. And, to paraphrase Rev. Jackson “We are Somebody!”
---------------------------------------------------------------------------------------------
Okay, here is where I fit in.
That CBS 48 Hours program featured an open air drug market with drugs being sold and used and violence taking place on the property of a baptist church on Chicago’s west side.
After reading Dan’s announcement, I reminded him that a successful mentoring/tutoring program had been operated from that very church on that very corner. That program was our very own little FunDay School, which was started by the Sun Rise MB Church as an outreach to the youth of our community.
I am here to tell you about some of our experiences and provide evidence that tutor/mentor programs like FunDay school and the ones you represent, do make a difference.
------------------------------------------------------------------------------------------
The corner of Kilbourn and VanBuren in K-town is almost deserted on Saturday mornings. The only traffic I saw (while trying not to see it) when I arrived at 9:45 am was skeletal images staggering in and out of the alleys and drivers pulling up to the curb to make exchanges with hooded young men on the corners. I’d sit in my car until others arrived for the day’s session...all the time noticing someone in a 3rd floor window... hoping that they didn’t think that I was watching what was going on while I watched them watch me. That was my predicament every other Saturday morning as I waited to go inside my church to set up for FunDay School. My presence did not disrupt their flow. Even after others arrived, we stood at the door so kids from the block could see we were in session and we watched them walk to the church. The dealers were not afraid of women or young volunteer tutors. Several times, we had to call for male back up, so the hooded young men would leave from in front of the church so we all felt safer. At the end of the session, regardless of the weather, the children had to stay at the back of the church until a parent came for them or we walked them home. There was no going out the front door.
This is what and how we overcame when we started the FunDay School tutoring program at my church about 10 years ago. We started slow but we did not give up. We knew it was up to us and people like us to do something to protect our children from these conditions and plant the seeds that would prepare them for a future with better conditions. Our persistence paid off. Once volunteers and parents committed to arriving on time...or early, I was only by myself for a few minutes...and I was given a key to unlock the door rather than wait on a church officer. And God even sent me a bodyguard. The little boy from across the street watched out of the window for me...and came running out to help me with my bags and make sure I got in ok. He then went in the back to set up tables and chairs and lay out the books and supplies for the other kids.
It wasn’t just us church members who overcame. We had volunteer tutors of all ethnicities and ages. Of course...so the police thought... nothing good could come out of the west side of Chicago, so they would pull our volunteers over and frisk them, as suspected drug buyers. (Funny, when I was sitting there by myself, I‘d never even see a squad car.)

But that did not deter the volunteers, they kept coming and we made up special id cards for them so they could “pass go,” if the police stopped them.
We did not run the drug activity away completely. But at least they cleared the corner when we were in session.
I won’t go into a lot of detail about our actual program. It is probably similar to others represented here...but I want to impress upon you that we needed to be there for our children. They needed us. My bodyguard had been a timid little boy who the gangs picked on. But he had the courage to come out and protect me. Of course, I am sure his grandmother watching from the window added to his courage.
-------------------------------------------------------------------------------------
Think about it this way. Somebody will be there for the kids. If it isn’t the right somebody, there is a greater risk that those hooded guys on the corner also known as “the wrong somebody” will introduce them to the false courage or false bravado found behind guns and violence. It is that false bravado that not only caused the physical deaths of 15 year old Hidiya Pendleton in January and 17 year old, Ben Wilson almost 30 years ago... but... it ruined the lives of
- 15 year old Omar Dixon,
- 17 year old William Moore,
- 18 year old Michael Ward and
- 20 year old 1Kenneth Williams;
Ward and Williams are on their way to long jail terms for Hidiya’s murder;
and Dixon, after being sentenced to 30 years for Ben’s 1984 murder, is now serving a 40 year sentence for another murder....he spent the prime of his life behind bars...he is now 43 years old and is not expected to be paroled before 2041, when he will be 71 years old....talk about a destroyed life
You did not recognize their names. But they were names of the young men that pulled the triggers...the ones that the wrong somebodies got to.

Ok I’ve tugged at your heart strings about the little church that could. Dan asked me to put more about FunDay School on the T/MC blog. You may read more about it, if you like.
But, the bottom line is “it only matters... if it matters.”

What I mean is, did our program make a difference? The answer is YES.

My bodyguard is now an outgoing 16 year old, probably the tallest person in our church and is doing very well in high school. He is just finishing his sophomore year but played the last two years on the varsity basketball team and he is being scouted by colleges. His mentor was a lawyer with the State of Illinois. One young lady who was a marginal student with a poor attitude just finished her junior year at Northern IL University where she is getting very good grades and has developed much better personal skills. She was paired with a financial analyst who had recently graduated from DePaul University Business School. We’ve got two other alumni at Eastern IL University. I have known these young people all of their lives. I know they all benefited from the tutoring and mentoring they received.
In case you think I am making all of this up, I’ve got a young man with me here today who just finished his first year at Concordia University in River Forest, just west of Chicago. He is an accounting major and a   wide receiver on the football team. He is going to introduce himself to you and share a few words.
__________________________________________________
But, before I yield, I’d like to drop a shameless plug.

The young man about to speak is looking for a summer job. Think about him if you have or know of any employment opportunities.

Also, he can probably add valuable perspective to your session discussions.

Thank you for listening.

At Dan's urging I did mention some specific obstacles that caused us to take an extended hiatus.  I talked about slow parents and how we motivated the kids in order to motivate the parents.   We gave stars for being present before a certain time.  We did a chart and promised a prize to the 2 kids with the most stars.  The kids made a pont of keeping up with their stars.  We gave points for bringing school work and more points for book reports.  I put the book reports in our church bulletin which made the parents and children proud. The kids made black history reports in February.  We celebrated Cinco de Mayo with a fiesta featuring a pinata.   the last 15 mins of each session they were allowed to play fun, educational games. We went to plays and Rush football games.   The tutors loved the football games.  We had the city bring the moonwalk at the begininng and end of each school year.  Basically we promised fun and tricked them into attending and learning while we had fun.

But we were done in by inconsistent tutors after a few years.  Most of the volunteers knew each other.   That was great for recruitment but they were young so when dating and other issues caused problems for them, we paid the price for it.  Also, we only had so much space dedicated for our sessions.  If we used the upstairs or sanctuary, discipline became a problem and there was fun but no learning.   Also, several times,  other church events caused us to cancel our sessions.  It became hard to stay on track.

it really is a triangle in which the 3 parts feed off of each other.  The kids, tutors and parents have to buy into the plan.  i know you don't need a child's permission.   But if they are all attitude, they will run the tutor away.  The same for if parents don't arrive on time with a child and the tutor sits idle when he/she could be home sleeping, doing errands, nails, the lawn.  But if a lovesick tutor is pining or absent, the child will not learn anyway.    And, alas, what is a poor coordinator to do when any of this happens?

PS   Sam starts working at the Chicag Waffle and Chicken restaurant in Oak Park next week!

Thanks for sharing your comments at the conference and here on the Tutor/Mentor Connection forum. Congratulations to Sam on his new job!

Map resource for redistricting in 2021