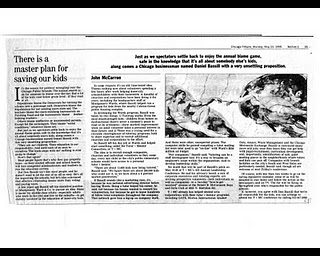 In other articles I've pointed attention to the year-round strategy of the Tutor/Mentor Institute, LLC and Tutor/Mentor Connection and shown how the May and November conferences have helped to get stories in Chicago media.  I've now created a page on the web site where you can view and read many of these…

10,000 hours of practice to create experts in field - Malcolm Gladwell 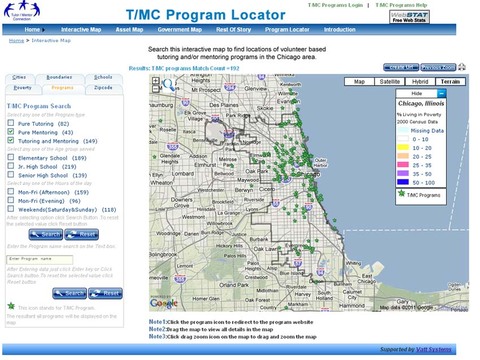 This article quotes Malcolm Gladwell saying "if you want to shine, put in 10,000 hours".

It  goes on to say "The greatest athletes, entrepreneurs, musicians and scientists emerge only after spending at least three hours a day for a decade mastering…

Process maps - apply to your work

These I-Open process maps provided by Betsey Merkel are very good. I'd like to hear from any members of this forum who are finding ways to integrate them in their efforts to build and sustain high quality tutor/mentor programs in one, or more locations.

Here is the process of ...culture building,…

Reposted from  email I receive:

This is Wave VIII of the census, which is a survey of organizations operating mentoring programs in the state of Michigan. It was conducted in the fall of 2010, and 137 organizations responded for a 58 percent response… 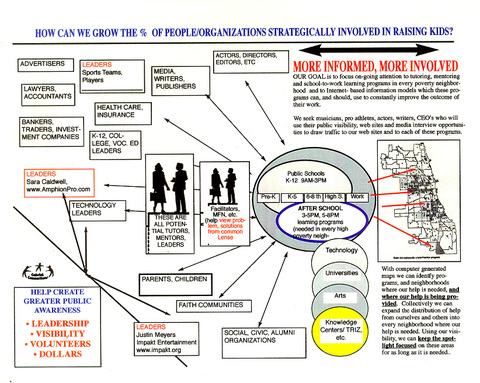 This is a graphic that I include in many articles I write, illustrating the role individuals can take in reaching out to people they know to draw them to information we share on our web sites and to tutor/mentor program locations where they can be volunteers,  leaders, donors, etc.  I am speaking to a group of students from Governors State University tonight…

In my Tutor/Mentor Blog I use graphics like the one below to illustrate our goal of helping inner city youth grow up over a period of 10 to 20 years. We all start at birth and it takes 20 years to get through the first formal stages of education and into the college, vocational or job stage of our lives. Yet, if you live in high poverty areas, you face more challenges.

Thus, tutor/mentor programs, if they…

Send message to five people and multiply the network This is a graphic that I  posted on my blog last Friday. It's intended to illustrate how we want leaders and volunteers to develop strategies that not only say "we have a problem" but also say "…

This photo shows Mike Trakan with one of the maps he has created for Tutor/Mentor Connection since he joined us in Jan 2008. View the maps and read the articles he writes on the mappingforjustice blog

Thanks for Mentoring Experiences

I posted a message on Facebook telling how I'd been involved for 37 years and how my life has been enriched as a result. One of our former students posted this response:

No, THANK YOU for caring when no one else would, you started a movement and I have watched it blossom into something I couldnt imagine back at St. Matthews Church, you and your family have sacrificed so much time, and Im proof that just one person can make such a huge impact on someone's life. Love ya…

A few months ago I read this Civic Enterprises report, titled  Untapped Potential: Filling the Promise of Big… Someone should tell that to the 35 -40 7th to 12th grade teens at Cabrini Connections who live in the Cabrini Green area, either in the Row Houses or the redeveloped property.  I wrote a blog…

Example of communicating ideas via animation and visualization

This video is important because if focuses on education, and because it demonstrates a way to use animation to communicate complex ideas and keep the viewer involved.  This would  be a skill that would be valuable in communicating the ideas of the Tutor/Mentor… Continue

As we enter 2011 the economy is still a mess and the competition for resources to fund non profits continues to grow. Thus, we need to be more creative, think smarter, and keep learning from the wisdom of others.

This article is one that I encourage you all to read. It talks about how your Twitter, email, or Facebook post can generate more response if it can connect…

A different kind of Philanthropy

Engaging the resources of universities, and their alumni 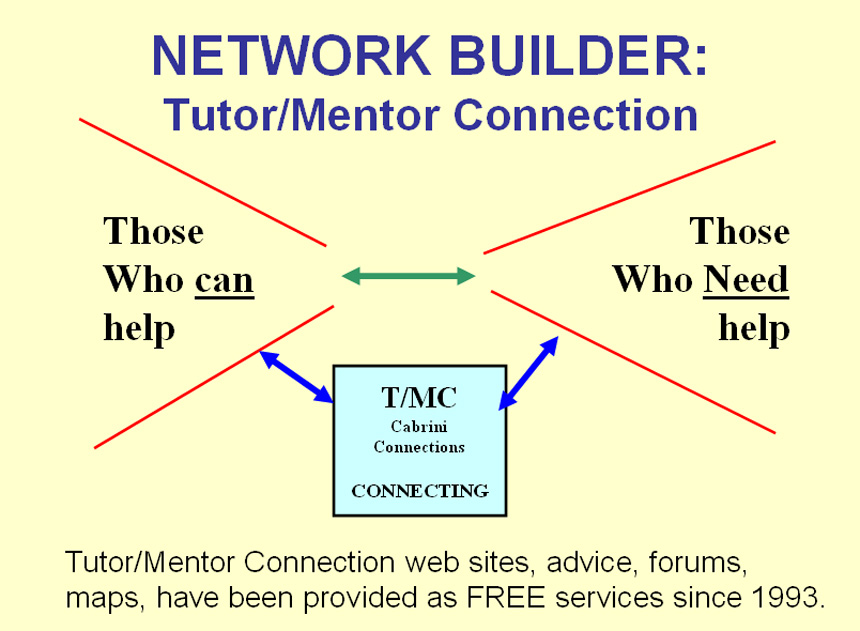 I've led Cabrini Connections, Tutor/Mentor Connection since 1993. That was well before the internet became such an important tool. I've used computers to organize and communicate my ideas since around 1980. Thus, much of what I've created in the past is stored on floppy disks that may never be opened again. 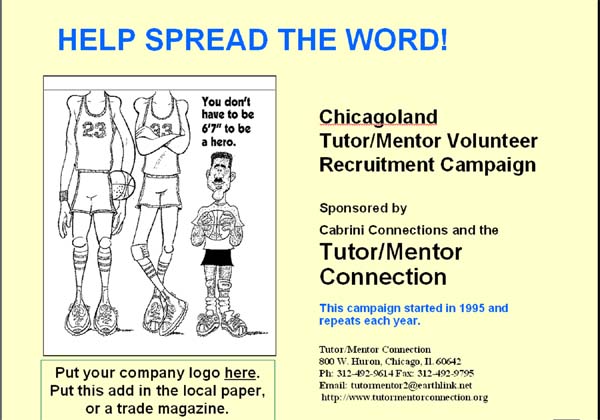 How can you help? What type of help do you need? 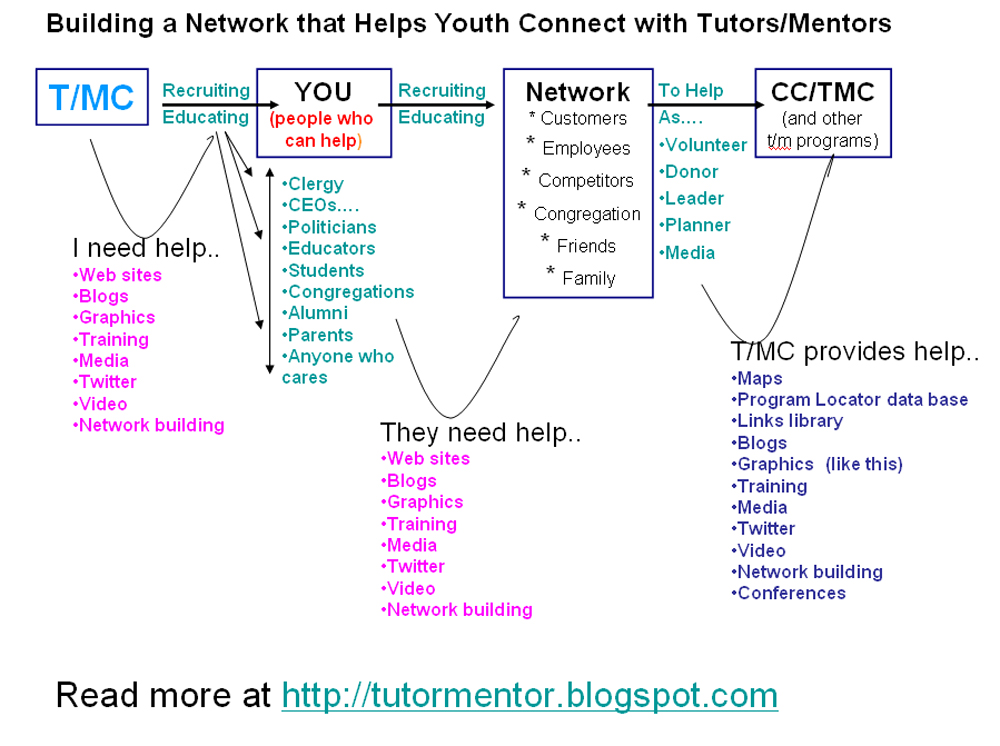 This graphic is one of many that I've created to try to illustrate ideas. In this case, I represent the Tutor/Mentor Connection (T/MC) which is the host of this forum. We're a small, thinly funded non profit in Chicago, so we do a lot of what we do with the help of volunteers and interns. Throughout this Ning site you'll see examples of how interns have converted graphics like this into animations, or how they are doing…

Spending time in solitude, learning and reflection is essential for leadership and innovation 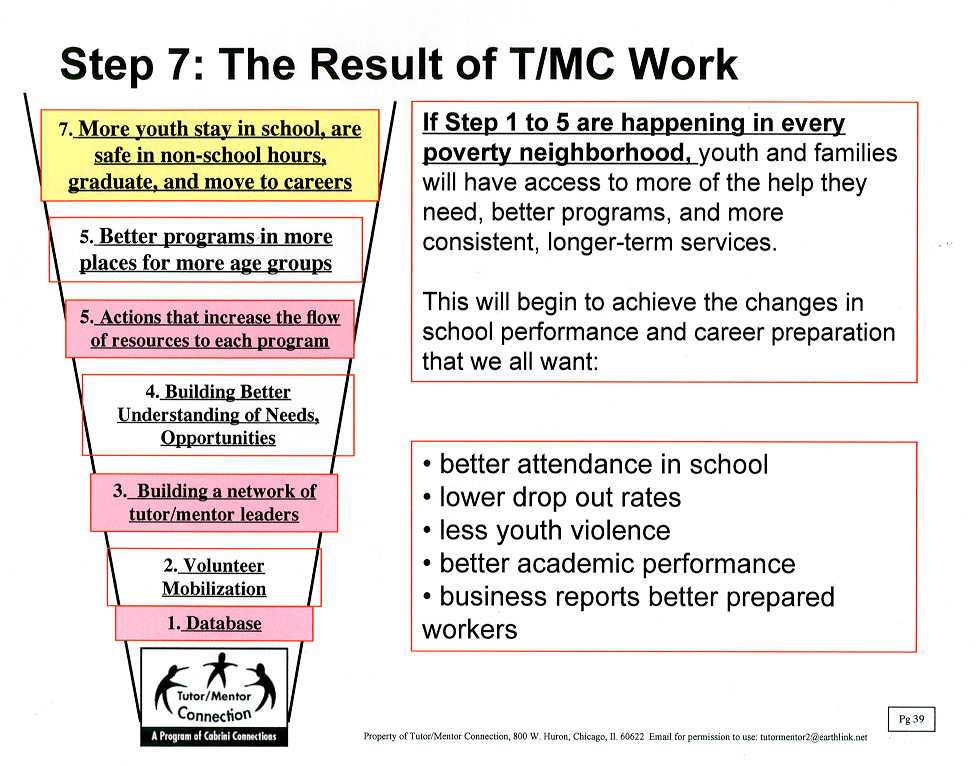 This graphic is one of many that I've posted on Ning, and on the Tutor/Mentor Institute site, and in my blog. It was developed as the result of many years of leading a tutor/mentor program, and of spending solitary hours thinking of ways to make what I do more effective.

I found an article today titled "…

Below is a map showing the mix of organizations who were part of the May Tutor/Mentor Leadership and Networking Conference in Chicago.

On this map we see there were many tutor/mentor programs, some from other states, but not nearly as many programs as there are in Chicago. We see a few universities, represented. We see one donor. We see some media. This mix needs to change, to include more donors, more universities, and workforce… Continue

This video was created by one of the interns from Korea who was with us a couple of years ago. It's as meaningful now as it was then.