For the past nine years (since 2006) interns from various universities have worked with Tutor/Mentor Connection and Tutor/Mentor Institute, LLC for periods of a week to a semester.

During the Jan-Feb 2014 internship I asked interns to look at work done in the past and give new attention to it. The graphic shown above is from this PREZI . A second intern createdthis video, which profiles the same past interns, but in a different format.

In October 2011, I began posting illustrated essays on http://www.scribd.com/daniel-f-bassill-7291 which had originally been posted in the library on the Tutor/Mentor Institute site. As of December 2014, these had been viewed 22,000 times by people from around the world.

During the 2015 and future internships my goal is that students will continue to create new visualizations, and will innovate ways to increase then number of people reading them and then spending their own resources and talent to help high quality, volunteer-based tutor/mentor programs thrive in more places.

If you are a student, educator, business leader from Chicago or another city and you want to join in on this project, just register to become a member then join this group and introduce yourself. As I provide more suggestions for 2015 projects you can begin to choose which you will work on and we can discuss new ways of sharing these with more people. 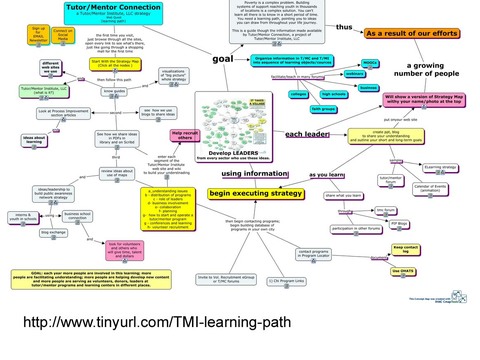 During the Jan-Feb 2015 internship I am asking interns to go through this learning path, opening each link and reading what is provided.  Every few days I want them to create a visualization that describes what they are learning, and how a political leader in a city, or part of a city, might use this information to support the growth of needed social services, like non-school tutor/mentor programs, in high poverty areas, or highly segregated areas, of a city or zone of a city.

Among the considerations will be a) how to motivate leaders in business, philanthropy, media, religion, education, etc. to spend time daily, or weekly, following the same learning path; b) how to motivate these same leaders to invite people into their own networks into the learning path; c) how to sustain this over many years; and d) how this can result in greater flows of needed resources into the neighborhoods where programs are needed, so programs grow and reach more people.

As our intern does this work, I invite others to do the same, thinking of ways leaders in cities all over the world might use this information to bring more people together to understand and build long-term solutions to complex problems. 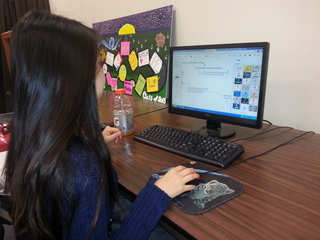 For the past two weeks Wona Chang, intern from IIT and South Korea has been creating a Prezi version of the learning guide concept map. Visit this blog to see the presentation, in both English, and Korean, language.

Until this week Wona had never used Prezi. One of the goals of this internship is to challenge interns to explore new technologies which they can use to communicate ideas and strategies. What the learn can be used by them often in future jobs and careers.

After the first intern project is completed, the second project will be to visit this set of pages showing work posted on Prezi and  YouTube by past interns and to create a list showing Project Title, ULR, Date Created, and Number of views. Here's an example:

The flash animation projects and the ones posted on Ning, don't seem to have counters on them, so we cannot tell how often they have been viewed.

By creating this list we'll a) have a full list of projects which other people can look at, and b) a total  number of views created since the project was posted to the Internet.  Interns will be able to see impact they are having, even several years after creating their project.  If we update this list, and add new projects each year, we'll be able to create a archive that is constantly giving us new information, and providing reasons for past interns to visit, and to retweet projects to friends, family and co workers. 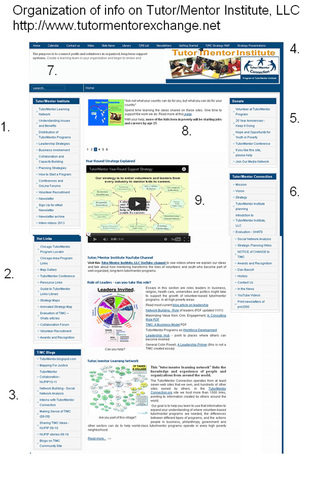 This graphic was created to show the organization of information on the Tutor/Mentor Institute, LLC site located at http://www.tutormentorexchange.net

This link shows where it is posted as part of "getting started".

I've created a power point, showing the purpose and content of each numbered section and included JPG images that can be used in a Prezi or YouTube.

The Prezi is really good. Just one correction and three additions.

I have added two pages to the Prezi ppt.  In the presentation I'd like you to create a "call out" on sections 1, 2 and 6 in which you open one of the links and talk about what's included. I've provided a graphic and text in the ppt.

In addition, add a conclusion:  "Thank you for viewing this presentation. I hope you'll save it and view it often and that you'll use it to teach others to use the Tutor/Mentor Institute web sites as a resource."

Here are four projects she completed: 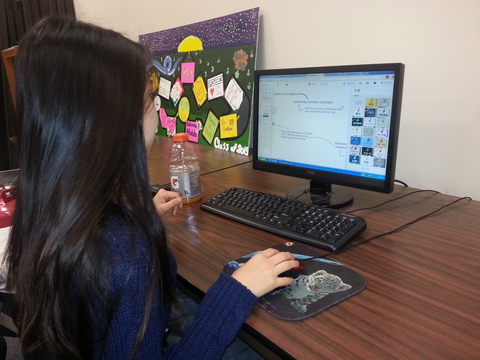 These are included on a list of projects done by all interns since 2006, which Wona also compiled.   Thank you Wona. I hope others will join in and duplicate this work. I look forward to meeting new interns in the spring or next winter.