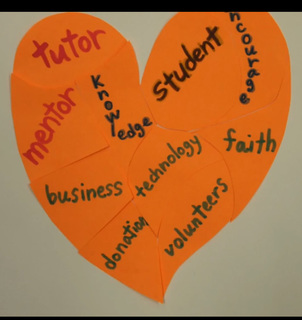 This is a graphic from the Winter 2012 intern project with IIT.

For the past six years (since 2006) interns from various universities  have worked with Tutor/Mentor Connection for periods of a week to a semester. During that time they have built their own understanding of the goals and strategies of the T/MC and have then created visualizations that reinterpret these ideas in a new, and hopefully, more interesting, way.

During the first week of an internship new interns are asked to review work done by previous interns and to create a visual introduction of themselves.  Visit this blog and scroll through posts going back to 2006 and meet our interns and see some of the work they have done.  The attached document has links to the introductions and blog articles of most interns going back to 2006.

Since July 2012 the T/MC has operated under a new organizational structure, the Tutor/Mentor Institute, LLC.  We're not a 501-c-3 so this makes it more difficult to attract financial support from individuals and foundations who supported us from 1993-2011 while we were a non profit. However, it also opens new opportunities for partnership.

In October I began posting illustrated essays on http://www.scribd.com/daniel-f-bassill-7291 which had originally been posted in the library on the Tutor/Mentor Institute site. During the May-June 2012 and future internships my goal is that some of the new essays, like this one showing how "ideas can stimulate process improvement" can be turned into new visualizations that will attract more readers and will lead to the introduction of these ideas into cities throughout the US and the world.

While the interns we expect in May/June 2012 will come from IIT in Chicago, this project is open to high school and college students from any place in the world. If you'd like to participate just introduce yourself into the group. While the projects we've worked on in the past have focused on Chicago, teams from other cities could focus the ideas on the needs for more youth supports in their own communities. Over the past 20 years I've connected to thousands of people from many places because of the active network-building of the Tutor/Mentor Connection.  I've been trying to find a way to use Social Network Analysis tools to share an understanding of who I've connected with, while also creating a tool that adds new people who join the network. Such a tool could be used by others to expand their own networks.

Browse the sections of this group to read about Social Network Analysis and work that has been done in the past.

Follow links in this section to see examples of how SNA can be used.

I've had interns and volunteers work with me on this in the past, but no one is working on this now. T 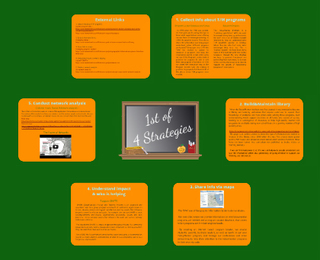 Mini Song created this Introduction to the Tutor/Mentor Connection and since then has been creating presentations to illustrate the four part strategy. 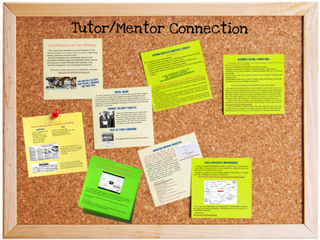 This is a second project done by Mina Song, which is describing the four part strategy of the Tutor/Mentor Connection and Tutor/Mentor Institute, LLC 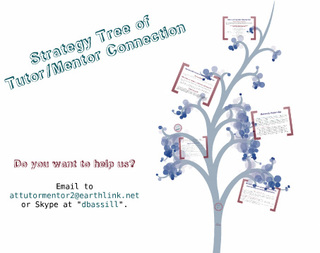 This is the graphic theme for the third part of the Tutor/Mentor Institute, LLC and Tutor/Mentor Connection strategy that Mina created. See presentation here.

A four part has been completed. All four will have links on the final page to each other.

When she started her internship on May 16 Mini had never used this application to create presentations. Yet in less than four weeks she has learned to use it enough to create these.

During the past month I've learned of another graphic presentation tool called Insight Maker. One demonstration is here.  Another is here. In the next intern cycle I'm going to see if a student can re-do Mina's four presentations using Insight Maker.  Want to try? 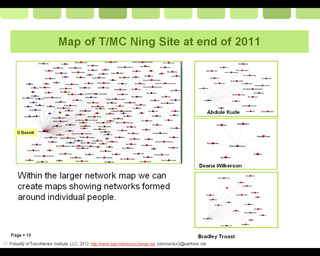 This graphic is from a Social Network Analysis presentation by Mina Song, Chul Wan Park and Dan Bassill.  See the presentation here.

On this page is a list of each project done by Mina with links to the projects. 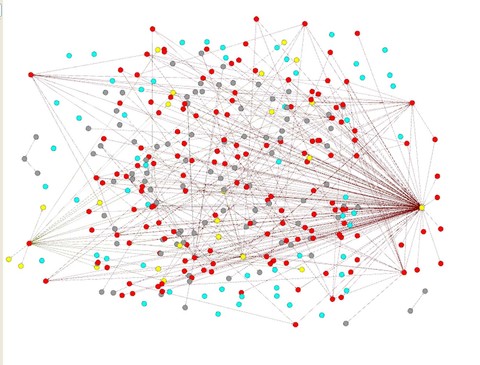 This map shows the growth of the Tutor/Mentor Connection network on Ning through the end of 2010. It's from a Social Network Analysis project completed by Chul Wan Park during his May-June 2012 internship. See his presentation here.