What ways are you finding flexible operating dollars for your tutor/mentor program?  (This discussion was started in 2008, and has been updated to reflect where we are in 2013. The opportunity and need have not changed since this was first launched.)

Since 1994 the Tutor/Mentor Connection (T/MC) has been working with groups such as the SunTimes Marovitz Lawyers Lend A Hand Program in an effort to increase the amount of flexible operating dollars awarded to volunteer-based tutor/mentor programs in the Chicago region. While the first award in 1994 was $2,00, the LAH grew to where $240,000 was awarded in 2007 and $217,000 in 2008 to more than 25 different volunteer based tutoring and/or mentoring organizations in Chicago. I received on grant of $30,000 for the Tutor/Mentor Connection in 2007 and 2008 and grants of $5,000 and $4,500 for our Cabrini Connections program.

While Lend A Hand did not fund T/MC after 2008 it has continued to raise funds for tutor/mentor programs in Chicago and in 2013 thirteen programs received grants.  In addition, an annual MY HERO Awards event has continued to raise visibility for tutoring and mentoring and encourages lawyers, law firms, businesses and others to get involved. I wrote about the 2013 Lend A Hand Lunch on this blog article.

We need this type of giving strategy to develop in every industry, and we also need funding to support the intermediary role of a Tutor/Mentor Connection.

The T/MC goal is that every industry, faith group, social and civic group, build communications and funding strategies that distribute their support into all of the high poverty neighborhoods of Chicago, and into programs that engage mentors and technology to help kids move through school and into jobs and careers. Furthermore, we want to see such strategies duplicated in other cities and countries.

In 2011 the T/MC strategy was discontinued at the Cabrini Connections tutor/mentor program where it originated in 1992, due to financial challenges and a change in the mix on the Board of Directors. Tutor/Mentor Institute, LLC was created as a business structure to keep T/MC operating in Chicago, and to help similar intermediaries grow in other cities.

Through this forum we hope to help similar networks grow in other cities and countries, so that individual programs in each city are funded on an on-going basis, along with the intermediaries who are trying to build these types of collaborations.

I've suggested for many years that if programs in other cities would create a volunteer-based tutor/mentor strategy, or build a database of who they are, with segmentation showing what they do, and who they serve, they could build business support for all of their programs, similar to the Lend A Hand Program.

Furthermore, if this were happening we could give recognition each year to which support programs in which city were doing the best, thus encouraging a competition to do good, or better than the competition, among the people we all depend on for support.

Instead of each program competing for a shrinking funding pool. Why not collaborate or work together to increase the pool? What are your fund raising ideas?

Permalink Reply by Daniel Bassill on January 1, 2009 at 8:59am
I hope everyone enjoyed a safe and happy New Year's Celebration. Now it's 2009. What are we going to do to make this a better world for our families, and for the people we serve through our organizations?

As you use this Ning page, I encourage you to read the blog articles posted on the home page, and follow the links from those articles to other pages with information related to why tutor/mentor programs are needed, and ways they can be more consistently supported. Since January is National Mentoring Month in the US, what types of discussion can we generate here that would attract more people, and attract more people to volunteer time, dollars or talent at any of our participating member organizations, or in other tutor/mentor programs of Chicago, or the cities where you live.

I encourage your comments.

Permalink Reply by Daniel Bassill on May 7, 2009 at 11:43am
I launched a discussion in a new Community Collaboration forum. I hope some of you will join me there and help me connect participants in that forum with the ideas and people in this forum and in other parts of the Tutor/Mentor Connection's network.

Permalink Reply by Daniel Bassill on March 8, 2010 at 9:44pm
The new link to the Community Collaboration forum is here

I don't know why to original link broke. Have any of you visited this forum and found it useful? 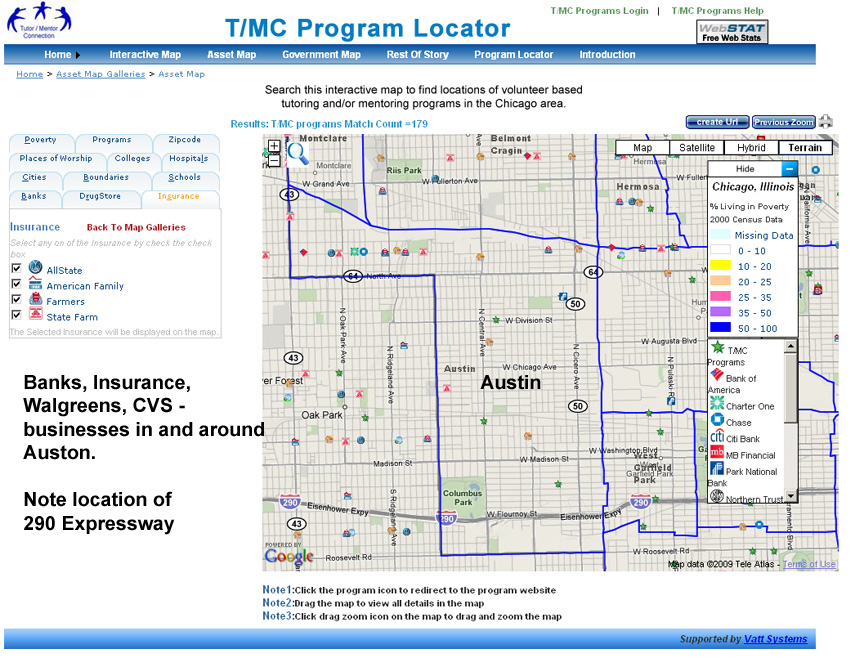 This map shows organizations who offer volunteer-based tutoring and/or mentoring in the Austin area on Chicago's West side, along with businesses in the area who might be providing volunteers and dollars, if the agencies worked together to get their attention, rather than competing separately on their own. See the blog article that shows more maps of Austin.

These maps were created using the interactive Tutor/Mentor Program Locator.

Permalink Reply by Daniel Bassill on August 11, 2009 at 9:50am
here are some suggestions for getting your volunteers involved in fund raising.

GiveForward.org gives people personal fundraising pages to raise money from friends and family for the charities and causes they care about.

If non profits can EMPOWER their volunteers to fundraise on behalf of their favorite charities, by giving them personal fundraising pages to raise money for your organization, these sites can be useful.

There are other companies that offer similar services such as fundable.com, active.com or firstgiving.com that you should check out as well. On the Firstgiving.com link you can see how one of my staff members and her boyfriend are raising money by running in the Chicago Marathon.

As far as how to get your volunteers to start pages on your behalf, here are a couple of ideas that have worked for some of the organizations that Give Forward currently works with.

(1) encourage them to participate in a local 5K walk, run or marathon and raise money for your org. On average, people on GiveForward.org participating in a 5K walk or run raise about $1000. People participating in longer events like marathons and triathlons raise $3400 on average.

(2) encourage your volunteers to set up a fundraising page on their birthdays in lieu of getting presents.

What about you? Have you had any positive experience with these on-line fund raising portals? The cost to get started is almost zero, and the fees are modest, but different for each service. What works for you?

Permalink Reply by Daniel Bassill on August 27, 2009 at 11:41am
We have new members joining the Tutor/Mentor Connection site every day. I encourage you to introduce yourself, and to go to the Groups section, where you can find sub groups focused on specific regions of the US or the world, or specific topics, like mapping, evaluation, or fund raising.

This site is a collaboration portal. It's not a commercial advertising portal. We want people to come who are willing to use their time, talent, network and ideas to help every one working with kids have the ability, and resources, to have a greater impact.

If we can model this collaborative type of helping on this site, it can not only benefit each participant, but it can also be a model duplicated in other social networks. 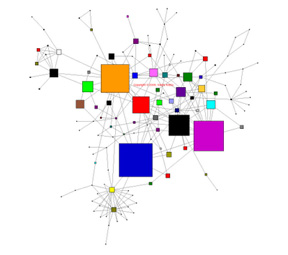 One of the purposes of this web site and the conference we host every six months in Chicago is to help people expand the network of friends and resources who are helping them in their work. The next conference will feature a key note by Valdas Krebs, an expert in Social Network Analysis. I hope you'll attend, or read his blog and share your own networking strategies on this forum.

Permalink Reply by Daniel Bassill on October 28, 2009 at 1:08pm
I just sent the October Tutor/Mentor Connection eNews to our email list of 4500 people. You can read it here. Pass it on to folks in your network if you can.

Permalink Reply by Mae Moreno on November 2, 2009 at 6:42pm
Has anyone ever organized a booth at one or more of Chicago's more prominent Farmers Markets?
What is sold at the booth would go directly to CC and the T/MC and could be themed to fit the season using reasonable cheap goods to raise funds and community awareness...hot chocolate, coffee, latte and warmed baked goods in Winter; Homemade lemonade and frozen/fresh berry lemonades or smoothies in the summer.
I'm not certain if Farmer's Markets are year round here in Chicago, I was spoiled in LA.
I thought of this when attending last month's Flea Market...there was a booth selling homemade lemonade...2-3 dollars a glass depending on size. Their cost per glass less than 25 cents.

We'd be mingling with people directly engaging with their community and sending the message that they support local farmers and vendors - the same people that are likely to volunteer or donate to CC and the T/MC program. Perhaps because CC is a non-profit the FM will cut a deal on space or donate space.

Permalink Reply by Daniel Bassill on November 2, 2009 at 11:02pm
Our students and volunteers organized a bake sale last weekend and raised $323. I'd like to see if others have some ideas for raising money.

On Give Forward.org you can see that we've raised over $6100 since late August with some campaigns.

Permalink Reply by Daniel Bassill on November 3, 2009 at 11:50am
I participate in many forums, where I share ideas and network with people who are not coming to this site, and may never come to this site.

One group I've been part of for a few years is at NED.com. Here are three discussions that might interest people on this group:


How do you keep track of your on-line connections? http://www.ned.com/group/i4c/news/4/

Permalink Reply by Daniel Bassill on December 16, 2009 at 3:53pm
I found some information about a Constellation Model of Collaboration which is strong on action, and very light on bureaucracy.

You can find another link here.

I added these to the T/MC library section on collaboration.

I'd like to form a network of people committed to helping youth through mentoring, who could work together as a virtual organization under this type of structure. I encourage you to read and reflect.